What do you do if you miss your flight check-in by two minutes (it may have been five) and are stranded at the Zanzibar airport with no money and nowhere to go?  You cry. 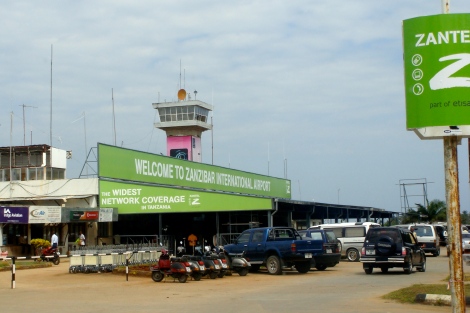 Just a little. A sobbing, hysterical woman with wild eyes and a snotty nose inspires more fear than sympathy.  When you need to soften the heart of the tough gentleman behind the counter, big brown eyes glistening with a few tears, a small trembling voice and a bit of persistence are much more effective.

We had just spent five days relaxing in Zanzibar, an African island off the coast of Tanzania.  My husband flew out early to meet a client in Dar es Salaam and I was taking a later flight back to Dubai. The hotel arranged a car to the airport based on my flight details, I handed over the last of my money to the driver and walked into the tiny airport where I was informed I had missed check-in by a couple of minutes and would have to book another flight. I initially laughed, the airport was a bit of a joke and its not like I couldn’t still make it on the plane but for reasons I don’t remember, that was not to be.

There were no other flights out that day.  The airline wouldn’t put me in a hotel because it was “my” fault I missed the flight.  My cell phone was almost dead.  My hotel was 45 minutes away.  There were no hotels within walking distance.  I didn’t have any money left in my wallet for a taxi and I wasn’t going to sleep on the dirt floor of the tiny airport.  I didn’t want to do it but I had no other choice.  Operation “Damsel in Distress”.

An hour later a taxi driver had agreed to take me anywhere I wanted to go.  A senior government official from Oman had kindly invited me to stay with his family for a day or two until I could get another flight.  And the gentleman behind the counter?  He called in some favours to get me a free room and dinner at the hotel where the airline pilots stay and he even drove me there himself.  I congratulated myself on a successful operation as I enjoyed another afternoon by the pool with a cold beer.

So that is how my trip to Zanzibar ended.  Here is how it began. 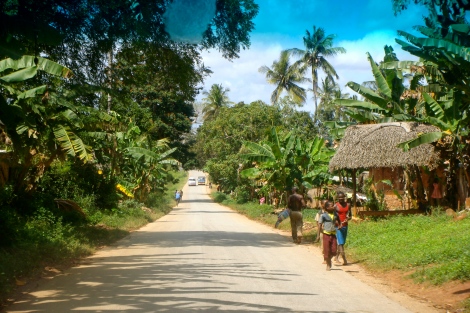 My husband spent a few months working in Tanzania so it was convenient for us to meet in Zanzibar for vacation.   It was my first time in Africa and I was immediately taken with its beautiful green landscape and the people who waved as I travelled the busy road to the hotel, their friendly attitudes seemingly unaffected by the poverty that I couldn’t help but notice along the way.

We stayed at the Zamani Zanzibar Kempinski (now called Melia Zanzibar) on the north east coast of what is most commonly referred to as Zanzibar. (Officially the Island is called Unguja.  Pemba is the other large island in the Zanzibar Archipelago.)

Our resort was the perfect backdrop for a tropical getaway.  The Indian Ocean, white sandy beaches, colourful tropical gardens, lush palm trees, infinity pool, brief afternoon rain showers and airy rooms decorated entirely in white.  It was a welcome change from the sweltering July heat in Dubai.  The shore immediately in front of the hotel was a bit rocky and weedy for swimming but the pristine resort beach club was just down the beach.  The staff greeted everyone with a cheerful “Jambo!” (a way of saying hello in Swahili) and every once in a while when the tide was low, a lovely old man on a bicycle would pass by selling sea shells.

This is where my husband found me when he arrived a few hours after I did.

What stands out most in my memory though is not the resort.  It is the time we spent wandering around Prison Island and through the narrow, winding streets of Stone Town with our wonderful tour guide David.

Known officially as Changuu Island, Prison Island is a 20 minute boat ride from Stone Town, the historical heart of Zanzibar City.  The Island was originally used to house rebellious slaves and later as a quarantine station for yellow fever cases in East Africa, but the prison that was built there never actually housed any prisoners.

Today, the quiet, little Island is home to a collection of endangered Aldabra Giant Tortoises, originally from the islands of the Aldabra Atoll in the Seychelles.  The first four tortoises were a gift from the government of the Seychelles to a British resident in Zanzibar in the early 1900s and now more than 100 tortoises roam the island sanctuary, one of only four sanctuaries in the world where you can find them.  The Aldabra Giant Tortoise can weight up to 550+ pounds and can live to be well over 100 years old.  When I visited, the oldest tortoise in the sanctuary was thought to be 144 years old.

Me, David and our hungry friend 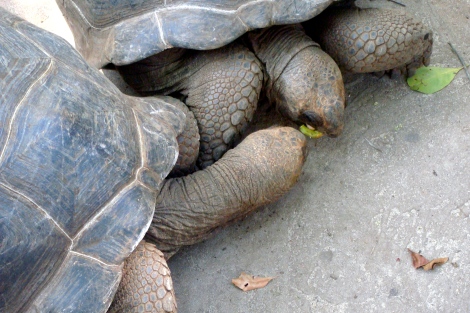 The rest of our day was spent exploring the maze of lively, narrow alleys in Stone Town, said to be the only functioning historical city in East Africa.

The city is an interesting mix of African, Arab, Persian, Indian and European influences filled with crumbling stone buildings, lively music, playful children, colourful markets, and more than 50 mosques. (99% of the population in Zanzibar is Muslim and in the mid-1800s Zanzibar was under the control of the Sultanate of Oman). 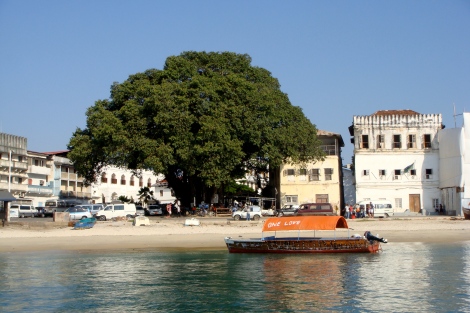 One of the landmarks I found most interesting was the Anglican Christ Church cathedral which was built in 1874 on the site of the largest slave market in Zanzibar to celebrate the end of slavery.  A moving monument marks the former site of the world’s last open slave market and notorious place where slaves from east and central Africa regions were bought and sold.  The high altar marks the location of the old whipping post.

Aside from the use of coral stone, homes in Zanzibar are most well known for the grand wooden doors that mark their entrances. Rounded tops are Indian in style and rectangular tops are Arab-style doors.  Most are ornately carved, many with the phrases of the Qur’an and some with brass studs traditionally used to protect against elephant raids in India.  In general, the greater the door, the greater the owner’s wealth and dignity.  Sadly, many of the oldest buildings are starting to collapse under the weight of their history and are now held up with (rickety) wooden supports. 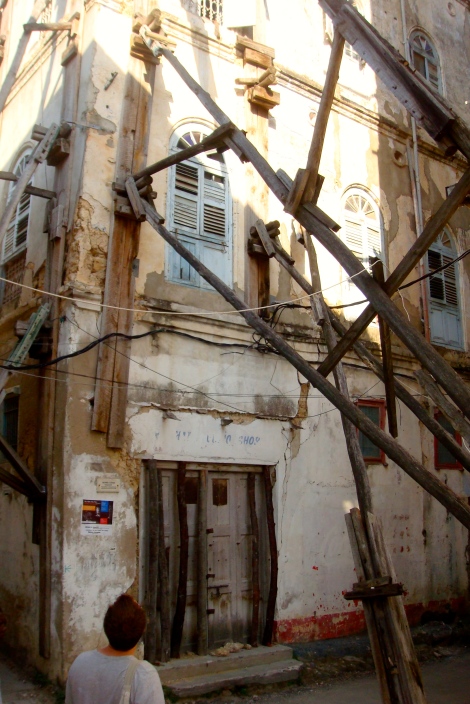 Like any holiday, one of the most enjoyable ways to unwind after a long day of walking is to sip a cold drink and watch the sunset.  Sundowners and shisha at the popular balcony bar at The Africa House is a fun option or go to the Zanzibar Serena Inn for a Tusker beer and live traditional music.  As they say in Swahili, “pole-pole”.  Slowly, slowly.  Take it easy.

Sunset from the Zanzibar Serena Inn

And when you eventually do have to head back to reality, try not to miss your flight.

It would be great to hear from you! Please feel free to send me your comments, feedback and suggestions at STUFFEESTUFF@OUTLOOK.COM
%d bloggers like this: