I’m in the mood to go skiing.  The problem is that I live in the desert and as a Canadian, I just can’t bring myself to go skiing at the mall.  (Yes, of course Dubai has a ski hill in the mall.)  So until I can plan my next vacation, let me reminisce with you about my recent trip to Switzerland for a luxurious ski holiday in Zermatt.

On a cold evening in March, my husband, a friend and I traveled to Zurich to visit a friend who lives there.  After a quick tour of her new flat, the four of us walked a short distance in the crisp air to Clouds Bistro Bar.  Located in Prime Tower, this lively, cozy bar with a view of the frosty city below was the perfect place to catch up over a cocktail.

We took the early morning train to Zermatt, passing crystal blue lakes, mountain villages and vineyards unexpectedly etched into the sprawling foothills of the Swiss Alps. Anxious to hit the slopes (or “pistes” as they say in Europe) a few hours later, we dropped our bags in the hotel lobby, changed into ski attire and made our way to the top of the mountain, the highest in the Alps, to see the infamous Matterhorn.

It was a beautiful sunny day and the afternoon passed by quickly.  Surprisingly without a single “Yard Sale” (Yard Sale – a term commonly used in Canada to describe when a skier falls, tumbles down the hill in a cloud of snow and loses their skis, poles, toque, etc along the way).  On the first afternoon anyway.

With rosy cheeks and cold toes, we made our way back to the Unique Hotel Post. Situated in the centre of Zermatt, a short 10 minute walk from the mountain, the Hotel Post is a gorgeous, modern hotel with cozy rooms and a spa.  We were led to the luxurious two-storey Matterhorn suite complete with stunning marble bathrooms, a second floor loft and a private rooftop terrace overlooking the village.  It didn’t take long to settle by the fire with a bottle of red wine.

The Matterhorn Suite – Photo courtesy of the Hotel Post

For dinner, our hearts were set on Fondue.  (Who hasn’t dreamed of eating fondue in the Swiss Alps?) We found what we were looking for at a restaurant down the street and filled our table with orange pots of cheese fondue and broth, baskets of cubed bread and plates of assorted meat. Starving from all the fresh air and exercise, we ate more fondue than I have probably eaten in my lifetime.  Then we waddled back to the hotel, skipping the party downstairs in favour of a nice long sleep.

Rest was a good thing because the next day turned out to be even more beautiful than the day before.  I didn’t know it when I woke up, but it would turn out to be a classic day on the slopes of Zermatt with more time spent wining and dining on the mountain than actually skiing.

We got a few early morning runs in before getting distracted by the music at Iglu-Dorf, a unique hotel consisting of igloos you can spend the night in and a bar carved into the snow.  There is not a chance you would find me sleeping in an igloo on purpose but I highly recommend lounging by the bar, soaking up the late morning sun and sipping a warm mug of Glühwein (mulled wine consisting of red wine, spices, citrus fruit and sugar that is traditional in German speaking countries).

A couple of Glühweins later, we hit the pistes on a mission to find Chez Vrony.  In Canada, I spend most of the day skiing with a non-negotiable stop for poutine (French Canadian specialty of french fries, cheese curds and hot gravy), another for hot chocolate and a final stop, Après Ski, for some beverages.  Not so in Europe.  It turns out that wining and dining is the sport and skiing is just a convenient mode of transportation.  At least on this day that was true.

Chez Vrony, a beautiful chalet on the other side of the mountain, is as warm and cozy as a family home with tables scattered throughout the main floor.  Outside is an expansive deck and chic bar complete with animal print lounge chairs.  I loosened my boots and made myself at home by the bar until we were led to our table on the deck.

And there we sat, our seats lined with faux fur and warm blankets, for most of the afternoon.  Great conversation, warm bread, gourmet pasta, steak and burgers, wine, homemade apple fritters and chocolate fondant, more wine, cappuccinos spiked with Baileys.  It wasn’t until the sky darkened and it began to snow heavily that we realized how long we had been enjoying each other’s company.  It was a rush to catch the last chairlift to the other side of the mountain.

There was a blizzard in the way, but we eventually made it to the other side.  Not far from the village, we were suddenly greeted by loud music and hundreds of colourful skis and snowboards haphazardly left anywhere there was space.  Perfect timing.  We had arrived just in time for Après Ski at Hennu Stall and if anyone knows how to Après Ski, it is the Europeans!   Live band on the inside, dance party on the outside, bottomless cups of Glühwein and any kind of liquor you can imagine.  The air may have been cold but the party crowd was warm from the inside out.  It is a miracle that we managed to find our skis and navigate the rest of the mountain after dark. Needless to say, I didn’t make it to the hotel party scene that night.

Despite the inevitable hangovers, we were among the first people to the top of the mountain the next morning.  The sun had come out for a third day in a row and all of Zermatt was covered in a fresh layer of powder.  Every skiers dream!  It was bitterly cold that morning and there may have been some complaining, but as we exited the last chairlift I was rendered speechless by the breathtaking view.  Vivid blue sky collided with snow covered mountain tops and fluffy white clouds for as far as I could see, which happened to be from Switzerland to Italy.

We skied the mountain from top to bottom (about 3700 vertical metres), each of us carving our own path through the snow.  Then we did the mountain top again, off-piste.  The terrain off-piste was steep and more difficult to navigate but the shimmering powder that beckoned us was knee-deep.   Enough said.  Within a couple of hours our legs were burning, our clothes were full of snow and we were ravenously hungry.  Lunch at Findlerhof was a necessity. 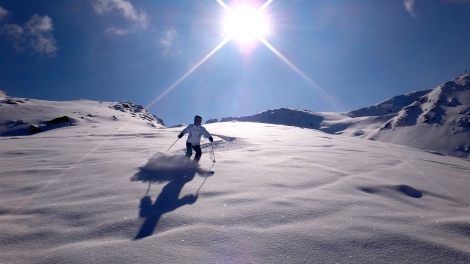 Similar in style to Chez Vrony’s big deck, beautiful view and fantastic food, Findlerhof had a more casual atmosphere.  Or perhaps it was just the warm, spring weather.  As guests were seated outside, sunglasses were put on, jackets were taken off, bottles of wine were ordered and plates of delicious home made food were served by friendly local staff.  Another fine example of mountain side wining and dining, followed by an afternoon of perfect spring skiing.

As the sun faded behind the Matterhorn, we returned to our private rooftop terrace where we had cleverly left a bottle of champagne chilling in a pile of snow.  We sipped champagne and watched the lights come on across Zermatt until our fingertips froze and we could no longer feel our toes.  Then we dined on fondue, schnitzel and little plates of melted raclette at local favourite, Whymper-Stube.

Our last afternoon in Switzerland was spent wandering aimlessly around Zurich.  We did some window shopping, took our picture by Lake Zurich, stopped by Sprüngli for the best hot chocolate I have ever had, and ended the day at Jules Verne Panorama Bar which is situated in the tower of a former observatory.

Overall, a very successful ski holiday I would be happy to repeat.  Thank you to my wonderful friend and tour guide in Zurich.  Hope to see you in Dubai soon!

It would be great to hear from you! Please feel free to send me your comments, feedback and suggestions at STUFFEESTUFF@OUTLOOK.COM
Loading Comments...
%d bloggers like this: