I am generally a patient, understanding person.  I can go with the flow.  But the idiot driver squad has been out in full force lately and I just lost my patience.

Last week I was driving on Sheikh Zayed (the main highway between Dubai and Abu Dhabi) and noticed an old Toyota van driving suspiciously a few cars ahead.  It was going much too slowly in the fast lane and refused to move over.  When a Mercedes G Wagon tried to pass him, the van finally decided to move and almost hit him.  The van moved back without looking and almost hit a Range Rover.  The Range Rover slammed on its breaks and another G Wagon swerved to avoid the collision.  This went on for a few kilometres, the van weaving all over the road at various speeds wreaking havoc on all of the cars around him.  Eventually one of the G Wagons had enough.  He slowed in front of the van, put on his four way flashers on and began gesturing wildly out the window.  I’m not sure what happened after that but as I passed the danger zone without incident I said a silent thank you to the gentleman in the G Wagon. 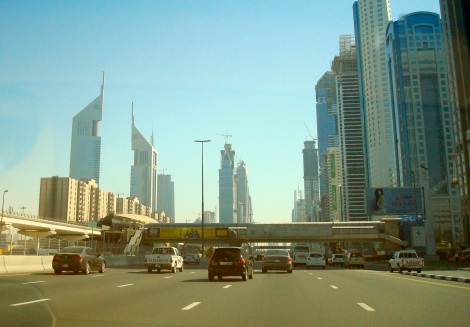 Today, a truck didn’t want to wait in line at a stop light to turn right.  He honked loudly at me and when I refused to drive my sports car over the SUV in front of me to let him by he drove up on the side walk between me and a road sign, paused long enough to angrily wave his hands in the air and glare at me, then made his turn. Baffled, I looked to the car on my left and we all laughed at the absurdity of what just happened.

There are some things you realize you will just have to accept on Dubai’s roads. People are going to tailgate you at high speeds and flash their lights if you don’t move over fast enough.  People are going to turn on their four way flashers every time there is a hint of traffic ahead.  The roads will always be in a permanent state of construction and sometimes you may not be sure how to get home from work.

That said, there are some things I am struggling to accept.

I can’t say I am a perfect driver all the time but I do have some common sense.  In an effort to educate the drivers who concern me the most, I have compiled a helpful list of simple road rules.

I may have missed a few but this should be a good start.  I hope it is helpful!

It would be great to hear from you! Please feel free to send me your comments, feedback and suggestions at STUFFEESTUFF@OUTLOOK.COM
Loading Comments...
%d bloggers like this: