Despite the typhoon we finally arrived in Ha Long Bay,  a peaceful end to an otherwise adventurous holiday in Northern Vietnam.  A natural wonder that draws thousands of tourists each year, Ha Long Bay is made up of nearly 2000 limestone islets that rise mystically from the sea, each of them intricately formed over millions of years of waves and weather.

Our original plan to spend two nights and three days on a modern luxury yacht fell through due to the typhoon.  But with only 1 night left in Vietnam, our travel agent Darian Culbert (who specializes in Ha Long Bay cruises) managed to find us a private boat with a well respected company.  The Princess Junk was a traditional junk boat complete with a crew of five people (Captain, Cook, Deck Hand, Bartender and Tour Guide) all to ensure we had the most relaxing 24 hours possible in Ha Long Bay.  It felt a bit overwhelming at first but we quickly settled in to enjoy the experience.

A three course lunch including fresh crab followed by cold wine served on the sun deck was just the beginning.  A warm breeze, mysterious cave, kayaking through the calm emerald waters, swimming at the edge of a secluded white beach… 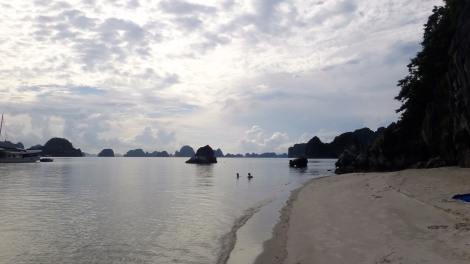 …a refreshing rain shower,  a quiet cove at dusk, watercolour sky, fabulous five course meal and a tranquil evening under the stars…

Dusk settles over Ha Long Bay after the rain.

… an early morning sunrise, a floating fishing village, a slow cruise back to the dock… all in less than 24 hours.  Cruising the mystical waters of Ha Long Bay was indescribable. 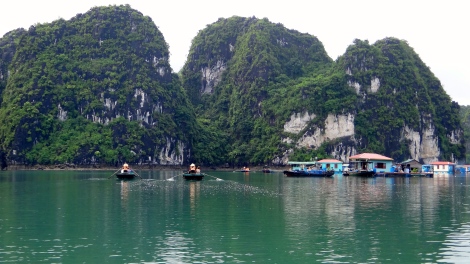 A floating fishing village hidden among the islets

Even though our trip to Vietnam had not gone according to plan due to the typhoon it somehow felt like it had gone exactly to plan.  Everything worked out for the best and overall, Sapa, Hanoi and Ha Long Bay made for a unique and memorable summer vacation.

2 responses to “Peace and Tranquility in Halong Bay”