Last night I dreamed I was on an indulgent, relaxing vacation.  One of those holidays where the sky is blue, the trees are a million shades of green and the air is salty.  The kind where you follow a lush forest path to breakfast, wander aimlessly through a small village until the sun sets and chat the evening away over the roar of the sea at a dimly lit restaurant by the beach. There are no schedules, unexpected rain showers are welcome and if it takes you all day to stumble across that perfect little place the locals recommended for lunch, it takes you all day.  I was dreaming of Bali. 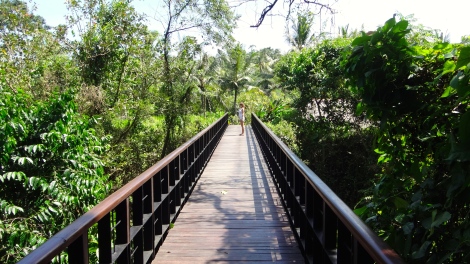 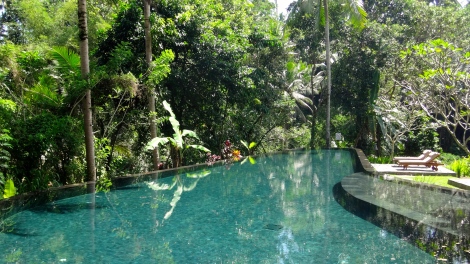 Such a vacation is real.  Two years ago my husband and I flew to Bali, a popular island province in Indonesia.  I was four months pregnant with my first child at the time so I suppose you could call it our “Babymoon” – one last, relaxing holiday before the arrival of our our gorgeous little girl.  Equal parts nervous and excited about the future, we soaked up the tranquil atmosphere of Bali, blissfully unaware of the beautiful yet exhausting changes that our little bundle of joy would bring.

The first few days of our holiday were spent in Ubud, the cultural centre of Bali surrounded by rice paddies and rainforest. We stayed at the Kayumanis Private Villa & Spa Ubud, a romantic resort hideaway that seamlessly blended modern convenience with its tropical forest setting.  Designed in the traditional open air style of Balinese living, our villa boasted an outdoor bathroom, shower and living space, a cozy, air conditioned cottage for sleeping and a refreshing private pool.  (By refreshing I mean “way too cold for us desert dwellers to swim in, even in August, but still lovely to look at”.) 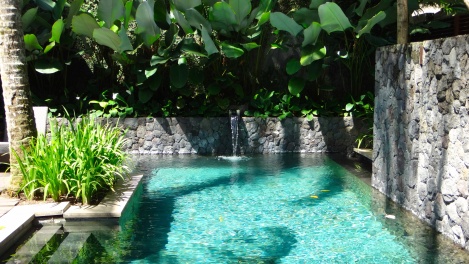 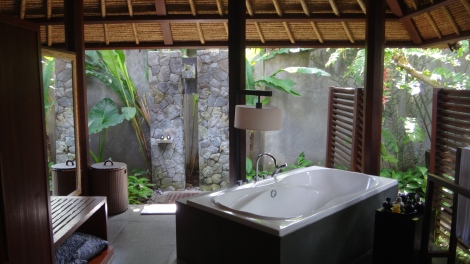 It was lovely to wake up each morning, wander along a narrow dirt path lined with exotic flowers to breakfast and sip coffee on the deck as the forest came to life for the day.  This tree top setting is also where I had one of the best massages I have ever had.  The massage took place on a rainy afternoon at the spa, a little tree house with one full wall open to the lush, green branches beyond.  Between the gentle rhythmic sound of raindrops and the magical hands of the Balinese masseuse I slipped in and out of consciousness for a while. 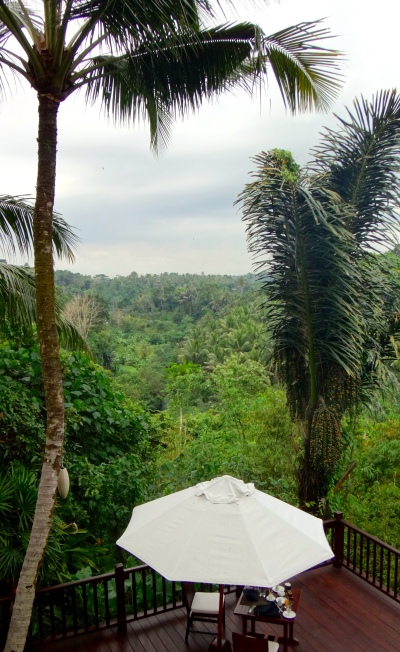 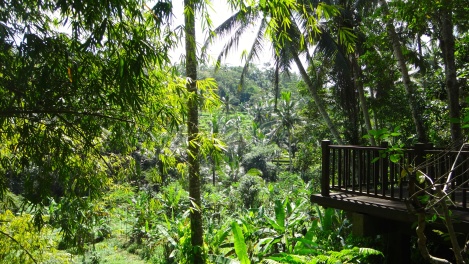 While the resort and rainforest setting were spectacular, the resort food was just okay.  I gobbled down an entire jar of homemade Maple Kayumanis cookies within a day (and even asked for the recipe for the baby of course), but otherwise we were quite happy to venture into Ubud to sample from the exceptional Balinese restaurants there.

Naughty Nuri’s, famous for killer martinis (tested and approved by my husband) and melt in your mouth ribs grilled to perfection on a street-side BBQ. Ibu Rai for a fantastic Indonesian lunch while idly watching the tourists shuffle by.   Terazo for fancier fare including Australian veal scallopini or roasted pumpkin ravioli with mushroom duxel, toasted almonds and sage butter.  And my favourite, Ibu Oka, a place highly recommended by the locals (and Anthony Bourdain) for its famous Babi Guling (suckling pig).  It took a few stops for directions but we finally found it at the end of a long, narrow path. The restaurant reminded me of an open air cafeteria buzzing with tourists from every corner of the world and scattered with an odd collection of pig statues.  The food also looked questionable, especially for a newly pregnant woman who couldn’t wash it down with a bottle of beer, but it was undeniably delicious and free of the expected side effects. 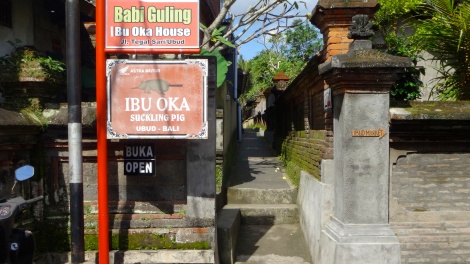 The rest of our holiday would be spent by the sea so we enjoyed our few days wandering aimlessly through the lively streets of Ubud. In addition to the string of restaurants, there were little shops filled with touristy trinkets, shelves lined with wooden carvings of penises (yes, I said penises) and in the window at Chendrawash, stood the tall, dark and mysterious dude from Borneo that even my husband agreed should come home with us.

My only caution with Ubud was the Monkey Forest.  A popular tourist attraction, the forest itself is striking. A towering tangle of leafy trees, hilly landscape and moss-covered statues provide a shady home to 600+ long-tailed macaques and a number of Hindu temples.  Sadly, rather than enjoy the scenery and admire the wise looking little monkeys with furry grey faces, thousands of tourists enter this small patch of ancient forest each year with little respect for their home.  Little kids and a surprising number of adults chase after them, tease them with food and grab their tails.  The result is a bunch of aggressive, badly behaved monkeys that aren’t afraid to jump on you, steal your bag and even bite your bum.  Even if you enter the forest with the respect that it deserves there is another tourist a few steps away that won’t.  My husband and I took the quickest route through the forest to avoid any bites to our bums, but managed a few cute pictures along the way. 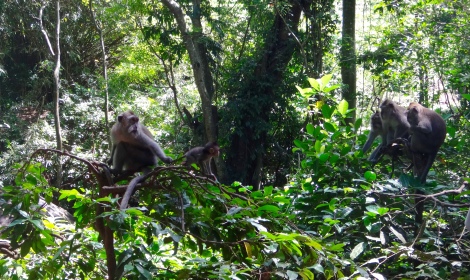 From Ubud we ventured about 40 minutes south to Sanur, a quiet sea-side area of Bali that began as a fishing village.  There we stayed at the Regent Hotel Bali* which had opened just a couple of months before and offered us a great deal.

At the entrance of the hotel we were greeted by a pair of guardian statues that have remained on my mind long after our first meeting.  Commonly called “Lion Dogs” or “Shishi” in China and “Foo Dogs” or “Foo Lions” in the West, these statues are usually found in pairs, a male and a female.  The female statue symbolically protects the people dwelling inside the building and keeps the good things in, while the male statue symbolically protects the home itself and keeps the bad things out.  Normally, these statues come with such menacing faces that I don’t pay much attention but this particular pair embodied just the right mix of intimidating yet gentle.  One day I would like to have such a pair guard my home and family. 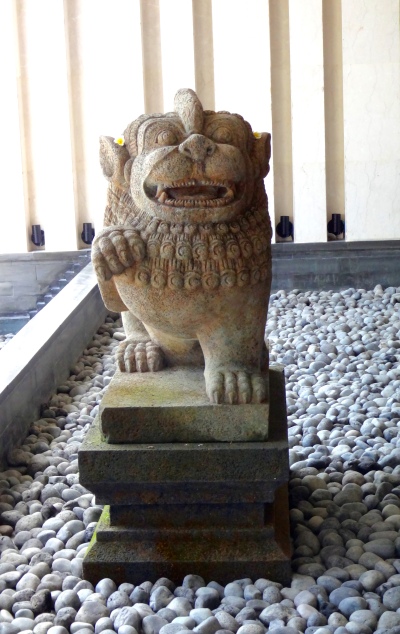 A few steps further, and we were immersed in the understated yet elegant lobby of the hotel.  Its soaring ceilings, clean, contemporary lines and simple, elongated water feature hinted at the beautiful, simple design throughout the rest of the resort.  It quickly became our favourite place to enjoy an evening cocktail (or mocktail) or two while the sun set. 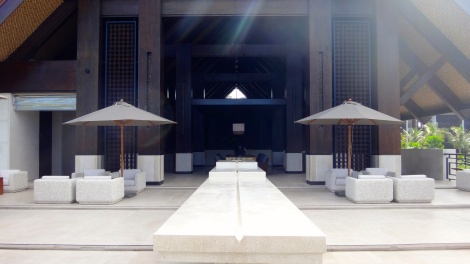 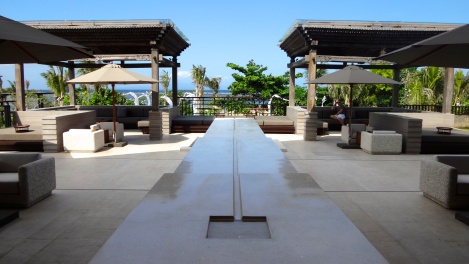 During the day, we spent a couple of hours by the pool sipping coconut water from fresh coconuts, sampling a variety of Balinese flavours from the pool menu and watching the fishing boats bob up and down in the distant waves.  You will be amused to learn that this pool was also too cold for us to swim in, even colder than the one in Ubud due to it size and the breezy weather, but I did dip my toe in once. 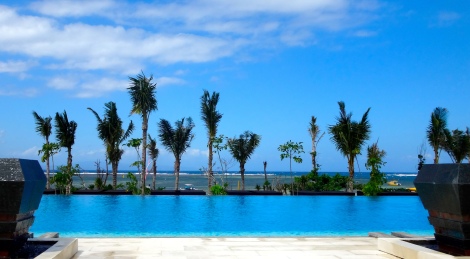 Unfortunately, despite its beautiful design and amenities, the hotel didn’t have much of a beach and still had a few kinks to work out with its service and its air conditioning.  After a particularly lovely dinner at the Four Seasons Jimbaran Bay one evening, we decided to swap hotels and move to the Four Seasons for the second half of our vacation.  There is Bali.  And then there is Bali at the Four Seasons.

Learn what I mean in Babymoon Bliss in Bali – Part 2.

*Note that last December 2014 the Regent Hotel Bali was taken over by the Fairmont and is now called the Fairmont Sanur Bali.  The hotel was filled with potential and I am sure it has now worked out some of those kinks.

One response to “Babymoon Bliss in Bali – Part 1”

It would be great to hear from you! Please feel free to send me your comments, feedback and suggestions at STUFFEESTUFF@OUTLOOK.COM
%d bloggers like this: